I have a couple of friends who have done IVF.  Both have twins.  They're not friends I know through my Catholic circles, but they're wonderful people.  Of the two couples, however, 3 of the individuals are self-identified Catholics.  I'm not sure any of the 3 are still practicing.  But this incomprehension I have has nothing to do with the Catholic Church's stance on IVF.  Or contraception.

What I don't understand is how anyone who struggles to have a child, especially for years, and especially long enough to spend thousands of dollars on artificial reproductive technology, can "get what they want" and then vehemently "be done" and contracept.

First of all, you (general "you") were infertile.  You used artificial means to conceive, which means nothing got fixed.  So...hate to break it to you, but you probably don't need contraception because you're probably still broken.  But that's tangential.

Not to mention, you used ART to conceive and then you pump artificial hormones into your body in order to not conceive.  Your entire reproductive life will have been...ARTIFICIAL!  Yuck.

But mainly what I don't understand is how you can use IVF to bring two beautiful new blessings into the world, and still not be open to life, should by some miracle you actually conceive on your own.

I learned through 3 1/2 years of secondary infertility that none of this childbearing stuff is in our hands.  I can't comprehend using contraception after infertility, even if IVF is not used.  Well...let's be honest.  I can't comprehend using contraception after having children (even without going through infertility) at all.  It's like telling God, "Hey, thanks for giving me what I wanted, but I'll take over now.  Don't need You and Your silly Plan anymore."

In one case of my friends, the wife would like to have more children, but the husband fervently says no.  They have ten frozen embryos that they pay a lot of money to store.  She still doesn't know what she will eventually do with these ten tiny babies of hers.  In her defense, as much as she loves her daughters, I do think she now realizes the enormous impact of having done IVF.  She's really torn on what to do with the embryos.  Like I said, I think she would try for more children if the husband was open to it.  She's against using them for science or research (thank God), and has also considered donation, but is afraid that would be too emotional...always wondering if a girl walking down the street was her baby.  What a burden to bear.

In the case of the other couple, I believe it's the wife who is "done."  You know...what if they had twins again?!?  Oh, the horror.  Two more blessings!  Whatever would we do!  I don't know as much about their situation, but in my discussions with her, she seems to have no openness to more children.  I pray her heart changes.

But in any case, the idea that someone would go through the pain of infertility, the emotional and financial stress of IVF, and then contracept to avoid another child is mind-boggling to me.
Posted by Nicole C at 1:56 PM 19 comments

I've been out of the blogs for awhile, so maybe this has already been discussed.  My husband heard this doctor on Gus Lloyd's show this morning.  I pray this good doctor is able to get his dream up and running soon!  For anyone in the Chicago area, you'll definitely want to check this out and help if/how you can!

There are some great resources on his website.  I would like to get him to Delaware to speak.  We have a couple of docs here tossing around the idea of getting NaPro certified!  Please keep that effort in prayer!
Posted by Nicole C at 11:40 AM 2 comments

Why I haven't been blogging lately 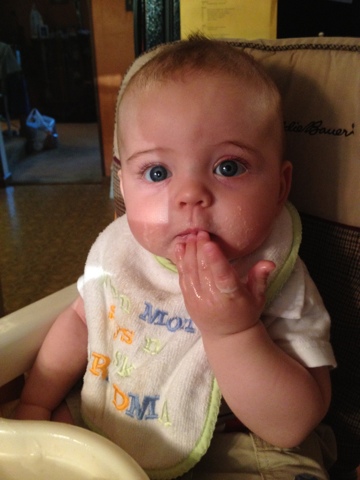 No, it's nothing profound.  Just because of this little bugger.

Between the little dude, intermittent sleep, and my inability to say no to volunteer opportunities, I've been in a bit of a whirlwind.  I used to be so good and scheduled!

Marshall is getting so big!  He's now eating solids, just started sitting up, and is getting very animated which is so fun!  He'll be 6 months old on Saturday, which pretty much makes me want to cry.  I can't believe how fast it has all gone.  And Jack just turned 6 and will be graduating kindergarten in a couple of weeks!!!  In.Sane.

My pro-life org is hosting a local Rally for Religious Freedom on June 8, which I'm really excited about (if there's one near you - GO)!  I'm also on the endowment committee, the dinner auction committee, and the athletic board at Jack's school, I'm vaguely working on some projects for/with the Diocese, and really need to get my business going.  So that's why it's been pretty radio silent up in here lately.

Rest assured, you're all in my prayers and I hope to catch back up with you SOON!
Posted by Nicole C at 10:34 PM 3 comments