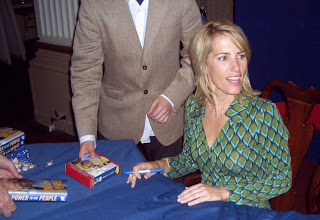 Last Wednesday night my husband & I went to Philadelphia to see my role model, Laura Ingraham. My goal in life is to be her BFF. Obsessed, I know. Oh well. She's fantastic. I got my book signed and actually spoke to her for about 20 seconds. We were this close!
Posted by Nicole C at 10:12 AM 0 comments

Sorry again that I've been away. We're traveling again. This time visiting family in Indiana. I've also been working hard at the new site I write for, BellaOnline. I'm the new Current Events editor. You can check it out here: http://www.bellaonline.com/site/currentevents. I will be writing once a week plus participating in forums and online discussions. Hopefully you'll join me there!
Posted by Nicole C at 10:03 AM 0 comments

Ok, it's been a few days, but, COLTS WIN! They slaughtered the Saints 41-10 on NFL's opening night! I must say I wish Drew Brees, my Purdue boy, would have played a lot better. In fact he had the lowest yards-per-completion average in NFL history. I always want Drew to have a good game, even when he plays the Colts. But I can't complain!

Here's what drives me crazy. Regardless of who the Colts beat, how much they beat them by, or how terrific their stats are, they for some reason will never earn the same kind of respect given to teams like the Patriots and Eagles. Prior to the start of Sunday's games, each analyst picked their Super Bowl favorites. Of the 2 channels we were watching with each channel having 5-6 analysts, TWO people picked the defending champs to return to the big game. Most picked a Pats/Eagles championship. What a crock. First...Donovan McNabb inevitably gets injured EVERY YEAR, and the Eagles disappoint EVERY YEAR. I am baffled time and again as to why "experts" keep picking them to win a Super Bowl!! And then the Patriots. They have two washed up receivers in Randy Moss and Donte Stallworth. Moss is known more for his mouth than his receptions. Running back Laurence Maroney is decent, but didn't compare to Joseph Addai in their rookie season last year. Then there's QB Tom Brady who seems more interested in fathering illegitimate children with supermodels than playing football. He's probably best friends with Rex Grossman...out looking for New Year's Eve parties. And he has yet to prove that he even has chemistry with his receivers.

Anyway, my point is that the Colts do the same thing every year. They play solid football as a team and have consistent stats to prove it. Peyton finally has a Super Bowl ring, so the pressure factor is out this year. We lost Dominic Rhoades as back-up RB so that's a factor, but we still have Addai, two unbelievable receivers and the league's best...BEST QB. Unmistakeably. My only explanation for the fact that the Colts still don't get anyone's attention is that they do their jobs in silence. That is, they don't thrive on media attention. None of them commit crimes, run their mouths, or cause problems with the rest of the team. They're good guys. I guess I'll take that over so-called "respect" any day. Let the Pats have the pressure. We'll take another ring.
Posted by Nicole C at 9:16 PM 1 comments

My Colts play the Saints tonight for NFL's opening night!!! So pumped!! Oh my gosh, what I wouldn't give to be able to be IN the RCA Dome tonight. And alas, my brother will be. GRRRR!!! Not fair. But it's his birthday and that's his gift. But my bone to pick is that my birthday was 2 days before the SUPER BOWL and not a glimmer of a ticket did I see! What gives, Mom & Dad?!? I'll be expecting them this year!

And the Nobel Goes To...

I can only imagine that Nobel will give their next Peace Prize to Hugo Chavez after this noble mediation. How honorable!
Posted by Nicole C at 4:46 PM 3 comments