I guess I was right

Remember this post?  About our "abundant blessing" that I didn't believe I deserved?  Well, I guess I was right.  We had our 12 week ultrasound last week and received some bad news.  We lost one of the twins.  The healthy baby measured 13 weeks and the one we lost measured 9 weeks.  So we had apparently lost him around 4 weeks prior...probably around the time we started announcing it to family and friends.  The good news is that the healthy baby was moving and kicking around, appeared very healthy, and measured a week larger than he should have been, so that's a good thing.  And I even felt him kick yesterday.  But I'm still nervous.  I have a more detailed ultrasound coming up in late June, which feels like eons away.  They're fairly sure the twins were totally separate, but they need to make sure I guess.

It's been a tough week but luckily I've had a lot going on with family in town to keep my mind on other things.  It's a mixed bag of emotions.  I lost a child, yet I still have one in my womb.  I feel guilty grieving for the lost baby, as though I'm not excited about the healthy baby.  But then I feel guilty not grieving for the baby I've lost.  And of course, I'm still excited that we're expecting.  It's going to take some time.  Any prayers for the healthy baby would be appreciated beyond words.
Posted by Nicole C at 10:10 AM 26 comments

I mean, seriously.  Could this have come at a more opportune time??? 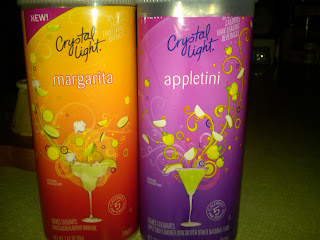 Thank you, Crystal Light.  You never cease to amaze me.
Posted by Nicole C at 8:43 AM 9 comments

.  It is truly the most miraculous prayer I have ever encountered.

My mom introduced me to this obscure little novena several months ago when she found it in a little Catholic bookstore in town.  She then heard about how powerful it was and said the novena for my brother, who was a fallen-away Catholic, but at the time beginning to search for more meaning.  She began the novena on a Thursday.  My brother then left for a business retreat the following weekend.  She finished the novena that Saturday.  He returned home on Sunday, walked into her house, and announced he was coming back to the Catholic Church.  Just like that.

Needless to say, my mom was sold!  She also said the novena for me before and during my surgery.  And after a successful surgery I'm now pregnant with twins.

Ladies...I can't urge you enough!  Order this novena.  I wear the ring on my right hand at all times in honor of Our Lady, Undoer of Knots.  I'm not saying it will cure everyone!  I'm just saying it's a very powerful prayer that you may not have yet heard of.  And a few more prayers can't hurt!

On our abundant blessing

It has been on more than one occasion that a friend has said something to this effect, regarding our twin pregnancy: "It's because of your 'yes' to God that He has blessed you abundantly."  They usually say this after I tell them of the parallel between the failed adoption situation and our finding out we're pregnant with twins.  First let me say that, no, I don't think it's a simple coincidence that we were prepared to raise non-biological twins had the mother chosen life and that after her abortion we're now pregnant with twins.  I don't think it's coincidental at all.  I truly believe that one of the children in my womb represents the life of the one that was lost.  If that makes sense.  It's kind of hard to put into words.

But...I also have a hard time accepting that we're somehow being specially blessed because of it.

I was talking about this with my husband the other night.  He said, "Yeah.  If you were given the opportunity to take in a slave who would either remain in a life of abuse and suffering or live with you even though it was a little bit inconvenient, would anyone say no?"  Ummm...exactly.  Why on earth would anyone not volunteer for this?  I guess maybe I've just been in the pro-life movement long enough to know that most pro-lifers are inherently selfless and would do the same.  So no, I don't feel like I should be "blessed abundantly" for our "yes" to God.

I'm not saying I'm not grateful for those kind words.  And I'm certainly not saying I'm not grateful for our blessing of twins!!!  Please, please, please don't interpret it that way!!  I sincerely believe we've been blessed abundantly!!!  I just don't know why.  I get a little uncomfortable with those sort of accolades, as if we somehow did something heroic by offering to adopt that child.  Because we didn't.  Again...it was just obvious.
Posted by Nicole C at 8:00 AM 12 comments

A little something to lift our spirits

Fear not.  Remember Who is in control.