We were blessed beyond comprehension... 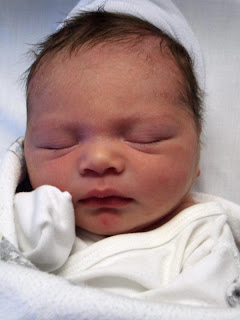 Happy birthday to OUR little prince!
Posted by Nicole C at 3:18 PM 14 comments

I live about 2,000 miles away from Phoenix, but somehow I was privileged to be featured in Catholic Phoenix!  JoAnna knows me from Leila's blog, and graciously asked me if I would be willing to do an interview on my pro-life activism.  But of course!  How could I say no??

PS: We also realized we're pregnancy buddies!  Both due in December!  :)  Please pray for the health of all these miracle babies of the blogosphere!
Posted by Nicole C at 8:00 AM 3 comments

First let me just say thank you for all the love and support I got in my last post...even from Miss G!!  Thanks, Gwen...it was an honor to have you comment on my blog!  :)  I am humbled by all of your prayers!

It's about time I let you know who I was praying for over the last 40 days!  Honestly, I probably wasn't the best prayer buddy this Lent since I was pretty physically ill for most of it (see last post!), but please know, prayer buddy, that I offered up every bout of nausea, every dizzy spell, and every exhausted stumble out of bed just for you and your precious unborn baby.  I admittedly wasn't as good about my daily rosary as I'd have liked to be, but I hope you felt my offerings nonetheless!

My prayer buddy this Lent was...........Megan at Heart of St. Monica!!!  I've been following Megan's blog through some trying times and was thrilled to be able to offer up my "sufferings" for her intentions!  I was also thrilled because she's from my home state and I hope to be able to meet her when I go back home this summer! :)  So, Megan, I hope my prayers were felt!

I also just learned that Lisa at Cheerfully Chaotic was praying for me.  To say this was an honor is the understatement of the century!  Thanks for everything, Lisa!  Apparently you have some powerful prayers...you got me through a lot!  God bless!
Posted by Nicole C at 12:00 PM 4 comments

This is a much belated and long overdue THANK YOU for all of your prayers during the potential adoption ordeal.  I know I asked a lot from you over a long period of time and it was so humbling to receive all of your support.  It was a stressful and emotional couple of weeks and affected so many people who had never even met my friend, let alone the baby's mother (such is the way with abortion).

I know many of you agonized with me when the news of the abortion was final.  But to be honest, I feel a bit guilty allowing you to feel so sad for me.  Because as the adoption/abortion story was developing - the days literally paralleled - we found out...I'm pregnant!

You guys...this is something I never expected.  I'll elaborate on the whole story in days to come (you may have noticed I've been a bit MIA lately), but the short story is that I never even had a cycle after my surgery!

I had some pains and blood on a Thursday and I, of course, assumed I was starting my cycle.  But the blood didn't last more than a couple of hours, which was odd. I assumed I was still getting back to normal after surgery.  So I talked to the nurse the next day (Friday) and asked her what she thought.  She basically said it could be a million things and told me to take a test by the end of the weekend.  That same day is the day my friend called me with the potential adoption situation.  Of course, I jumped at the request.  My wonderful husband and I have always had a mutual understanding that if ever presented with the option of saving a child from abortion neither of us would hesitate to offer to adopt.

So, the days went on and as I was praying like never before for this young mother not to abort her child, I was also taking more pg tests, getting hormone blood tests done, and praying, yet holding back any excitement for fear of disappointment, that this was really happening!

Because we feared that our news might affect the birth mother's decision, we kept our news to ourselves (not to mention it was still very, very early).  However, we were fully prepared to raise non-biological twins if that's what God had in store for us.  In fact, we were pretty excited about the prospect!  It would be a challenge, but certainly a unique and exciting situation!

Well, as you all know, the adoption situation ended tragically in abortion.  We were devastated.  But we had to move on.

Back to my news.  Because I hadn't had a cycle since my surgery (I literally haven't had a period since January!), we weren't quite sure how far along I was.  So my doctor ordered an early-term ultrasound.  I was so thankful for that because I didn't even have a due date yet!


IT'S TWINS.
There's nothing I can type in a blog post that conveys my complete and utter SHOCK at hearing that news!!! Good shock!  But shock, nonetheless!  I don't have twins in my family.  I have friends with twins, but none that live nearby or that I've been a part of their growing up.  This was just out of the realm of possibility for me!  Twins aren't part of a world I'm familiar with!  Ha!!!  Mike's paternal grandmother is a twin, but could that affect me??  We're still working on figuring that out.  It was absolutely amazing, miraculous news!  The best part about it is: THE LAST FOUR YEARS FINALLY MAKE PERFECT AND COMPLETE SENSE.
I hope none of this information hurts any of you.  It may seem like this all happened very quickly for me, since I've only been a part of the IF blogosphere since January.  But rest assured, I have been carrying the IF cross for four years.  It's simply a miracle.  One that I don't even come close to deserving.
There are so many more things I want to allude to, like the fact that I visited St. Gianna right before my surgery, that my mom said the Mary, Undoer of Knots novena before/during my surgery, that despite the abortion we ended up with two babies after all and what that means, etc, but this post is already too long so I might have to elaborate in upcoming posts!
In the meantime, I'm still very early and twins are considered low-risk/high-risk, so any prayers are MUCH appreciated.  These kids have had me sick in bed for days on end (which is a good thing!), so please just pray that they're growing and developing like good babies should!  God bless you all.  I certainly don't deserve this.
Posted by Nicole C at 8:00 AM 41 comments

After several attempts, I was finally privileged to meet up with J from St. Rita's Roses on Saturday!  I live about an hour outside Philadelphia, so never missing a chance to go into the city, I drove in for brunch.  We connected instantly, and ended up chatting at the restaurant for FOUR HOURS!!!  It was amazing!  She told me as she left, "It was nice to meet you," which caught me off guard because it seemed like we'd known each other for decades!  After brunch we walked in the rain to Chinatown, where I wanted to pick up a golden monkey for Jack's Indiana Jones birthday party!  Haha...long story!

I'm an idiot and forgot my camera, so I'm going to link you over to J's post if you want to see a pic of the two of us!  We really had a great time.  It's so nice to meet other women I have so much in common with.  It was my first official blogger meetup and I hope to be able to meet many more of you amazing ladies!!
Posted by Nicole C at 9:37 AM 6 comments

Look What Happened in Wilmington!!! 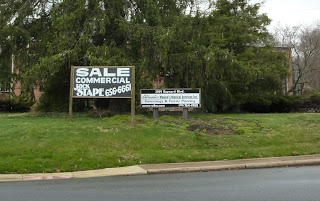 No, your eyes are NOT deceiving you - one of our abortion clinics CLOSED!!!  I can't convey my excitement via blog, but let me tell you, this is THRILLING!!!  We've been praying and holding vigils at this clinic for years - and now it's gone!  This particular clinic is the one where Kermit Gosnell worked before he was jailed for murder (it's so ironic to write that - "before" he was jailed for murder.  He's always been murdering).

Our 40 Days for Life vigil is actually taking place at the Planned Parenthood clinic downtown, but we have a regular presence at this clinic on Saturdays.  And over the years we've probably given this one more attention.

We've been working so hard to bring attention to this clinic and get it investigated since the Gosnell findings in Philadelphia in late January.  To my knowledge, authorities never entered this clinic to investigate, but apparently the fact that both of the other "doctors" there had their licenses suspended was enough to get it closed!

Certainly this means that PP will increase it's business for the time being, but it also means that it's one less place for us to spend time!  Now we can focus all of our efforts on PP, with prayers that Wilmington, Delaware will be abortion-free very soon!

That would be huge because according to the latest statistics, Delaware is #1 in the rate of abortion in the U.S.  Yeah, you read that right.  Number one.  It's so sad for me to say that because I feel like some sort of failure of a pro-life activist!  But...this clinic-closing news is very uplifting.  We also have a couple of very good pro-life bills in the state legislature now that could make a huge difference.  Please pray for our little state of big abortion.  We still need it!

The Heartache of IF

I was going through old emails today and I came across this article from Focus on the Family called "The Heartache of Infertility."  Just thought I'd post it in case it might be helpful to any of you out there.
Posted by Nicole C at 1:24 PM 0 comments